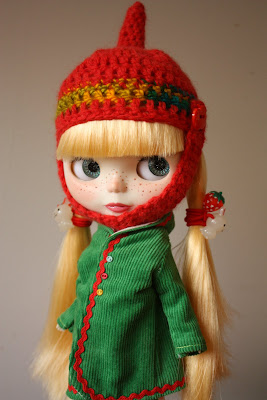 I made this little corderoy duffel coat with cute Japanese fabric lining. I added multi-colored buttons and red ric-rac. The lining are multi-colored tiny teddy bears on a creamy white ground. Then I crocheted a matching Gnome hat with this lovely angora yarn and I added an apple button to the strap closure.

yesterday was my birthday and Although we had plans to be in Iceland and it went all to hell, we still managed to have a nice day. We started off at the Brooklyn Flea, an indoor flea market, where I found an awesome tobacco pocket tin and lots of vintage sewing goodies. 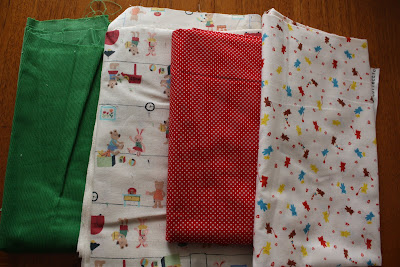 The coat's lining is the first fabric on the right, tiny bears need to take a pic of the inside. 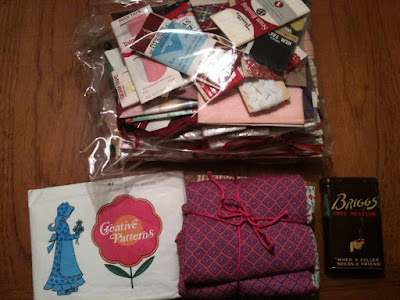 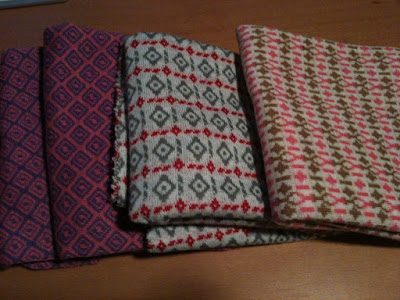 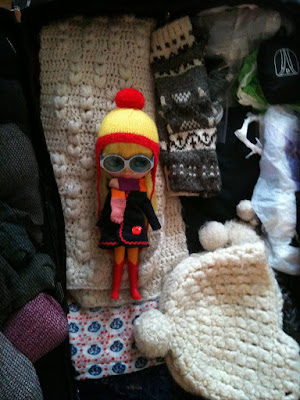 "All Packed and no where to go"

I was all packed and headed to the airport ready to celebrate my birthday in Iceland, when I get a phone call in the cab from US Airways with a robotic voice on the other end. "You're flight has been cancelled, please contact USairways to reschedule. We were literally pulling ip to the door at the airport terminal so we ran to the counter, and oddly enough only one other person had the same problem. We were extra lucky that we got the nastiest person ever to "help" us. They couldn't get us on any flight that would get us in to meet our connecting flight in Boston to Iceland. My partner decided to head over to nice older gentleman who tried to help us but the best he could do was put us on a plane to Heathrow then Iceland, an 11hr trip, on Thursday afternoon when a trip to Iceland is 5 hrs. Considering our return flight was Sunday evening getting to Iceland on Friday would have been a waste of time. OH! and the C**T who first attended to us wanted to put us on standby for 7pm flight to Boston arriving at 8:09pm to connect to an international flight leaving at 8:35pm, I'm no genius but you know that would be physically impossible. When the older gent that was helping us saw what this woman was doing he was like they are not going to make that flight if you put them on a 7pm shuttle. So in the end there was no way of getting us to Iceland, I spent about 2 hrs crying at the airport with my partner in shock and trying to console me and trying to get Expedia to refund us all our money, they claim they are giving us a full refund. But who reimburses for the 2 cab rides to and from the airport ,the pre-paid dogsitter/dogwalker, the special gear we bought for the trip all the little things add up to a lot of money. BOYCOTT US AIRWAYS! BRING THE MOTHERF*CKERS DOWN!
Posted by Jannese (crafty_love) at 4:52 AM No comments:

Email ThisBlogThis!Share to TwitterShare to FacebookShare to Pinterest
Labels: travel 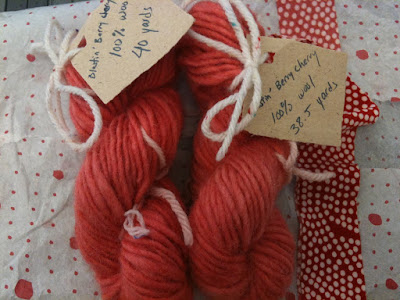 My friend Suet, gave me a lovely early birthday gift this weekend, home spun and hand-dyed yarn. Suet split and re-spun some chunky wool yarn she had lying around using a drop spindle then she Kool-Aid hand-dyed the yarn in "Blastin' Berry Cherry", her packaging was simple, clean and lovely. I plan to make a pair of fingerless gloves with this batch!
Posted by Jannese (crafty_love) at 7:24 AM No comments: 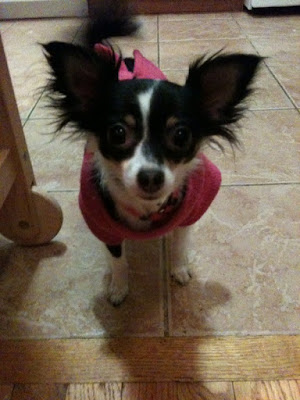 Meet Francie our newest member of the family. After searching and meeting a lot of dogs and a lot of ,strange but nice, people we found little Francie a tiny chiwa full of spunk. Francie's foster mom, Carrie, is a totally normal cool woman with a big heart, she had Francie for a year and finally decided it was time for the little Miss to have a forever home.
We are so lucky to have found her, she's a perfect fit, Budda likes her and she has no problem telling Budda that she won't take any crap from him. At a whopping 4.5lbs she's a tough broad. Francie is two years old, she came from a scary situation, her original family surrendered her to WaggyTails because they were fleeing for their lives from an abusive husband/father. This man took it upon himself to abuse his family including tiny Francie. The mom decided it was time to find herself, her kids and her little dog a safe home so she worked for one of Waggy Tails fosters and she helped her out. When Carrie started to foster Francie (originally Persephone) she thought she was gaining a lot of weight so she put her on a diet, she still was gaining weight and then one day when she was sitting on her lap she felt a little kick from Francie's belly, she was pregnant! Turns out she was hanging out with an unfixed male Chiwa before her surrender and got knocked up. Francie had 3 pups, one didn't make it, but the other two are happily living in Brooklyn and she gets to see them from time to time, and she loves them. We plan to keep her in contact with her pups. Her Foster mom after all that thought she would keep her since her ailing Pomeranian took a shine to her, but then he passed. Francie's foster mom realized she'd do better in a family with another dog, that's where Budda comes in, we met her last night and past muster, so tomorrow she comes home with us. I already went to Trixie and Peanut and pick up some cold weather sweaters up for her, Debra got her a bed, food and toys. WE"RE READY!!!!!

Posted by Jannese (crafty_love) at 1:43 PM No comments: 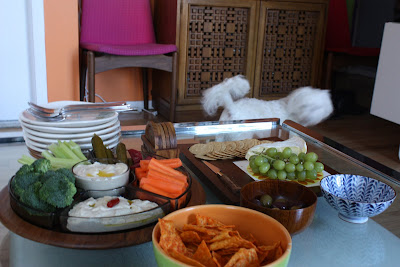 Crochet Sunday was a lovely afternoon with friends. I was actually trying to learn a new knitting technique, when it actually looks like something I'll post piccs, but this is the flower that I work on when I was sick last Monday and finished up on Sunday eve.There was a LOT of snacks to be had and my friends must have remembered I love sweets because we had a bounty of cookies of every sort, YUM! My friend, Adriana, furiously worked on her crochet monkey with knit overalls for her friend Anca's baby, Nathan, pictured below, very cute! And you can see her working on her monkey too! Check the snacks :) 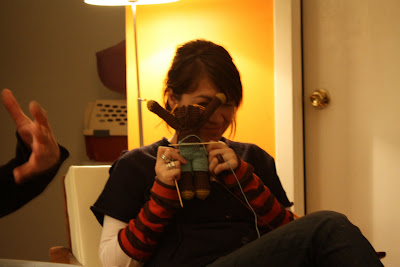 Adriana (of Saru Saru) and her Monkey 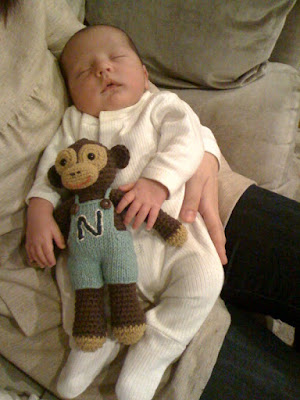 Baby Nathan and his new Monkey, by Adriana (of Saru Saru) 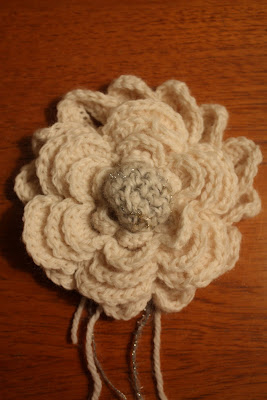 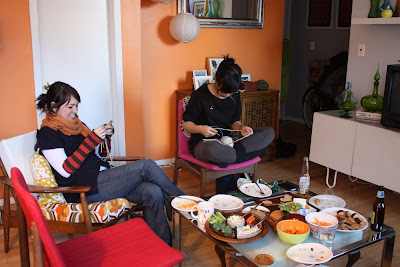 First two friends at the crafty party
Posted by Jannese (crafty_love) at 2:33 PM No comments:

Email ThisBlogThis!Share to TwitterShare to FacebookShare to Pinterest
Labels: crochet 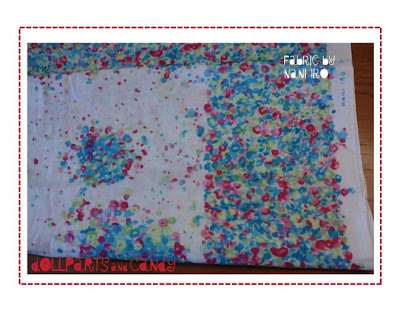 IN MY SHOP!!!! Nani Iro fabric by Japanese Textile designer Naomi Ito is available in my Etsy shop. Beautiful 2009 collection, Fuccra and Fuwari prints, one color combo is white ground, the other is black ground, both are gorgeous! Selling it by the 1/2 yard. 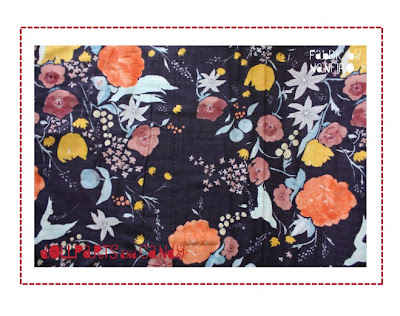 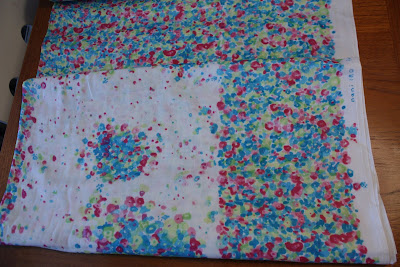 Posted by Jannese (crafty_love) at 9:31 AM No comments: 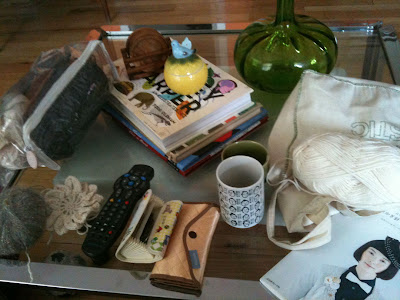 I've been sick for almost 3 days and at this point I'm not sure if it's my hormones or just a regular ol' virus. In between doubling over in pain and sleeping I've been crocheting super cute flowers from the Fumi book I got last week. After watching Virgin Suicides and Eternal Sunshine of the Spotless Mind I was ready to kill myself, but lucky for me the UPS guy rang the doorbell, and I FINALLY received my bolts of Nani Iro fabrics! I ordered them around Thanksgiving I had forgotten that I even ordered them anyway they are gorgeous and they'll go up on Etsy this eve. Sneak peek below ,my dslr camera battery crapped out on me in the midst of the photoshoot so for now accept my iphone pics please, better pics to follow. 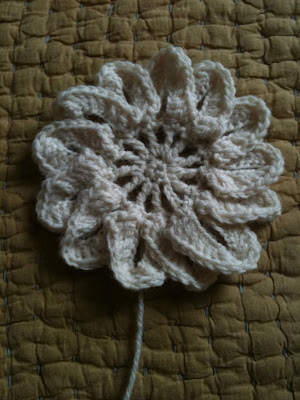 first part of my flower from the "Fumi"book 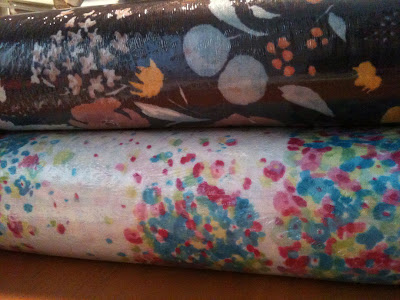 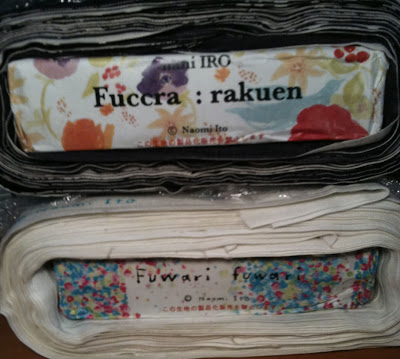 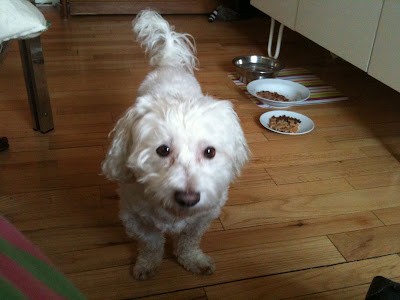 hey lady I know you are sick, but get your butt of the sofa I gotta pee.
Posted by Jannese (crafty_love) at 12:02 PM No comments: